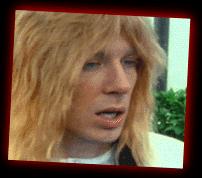 St. Hubbins, David Ivor (b. Aug. 13, 1943): Lead singer and original member of Tap. David was born in Squatney Women's Hospital, attended Saint Scrubbage (then Sulfer Hill Academy for Boys) and spent his childhood dabbling with guitar. Wrote and sold songs to local groups such as Blue World China and also spent time as an apprentice locksmith. In 1986, David married longtime girlfriend Jeanine Pettibone and moved to Pomona, California, where they opened two "boutiquerias." David also taught soccer and managed several local bands. Flunked citizenship test after referring to two houses of Congress as the House of Commons and the House of Lords. (BB) Epitaph: "Here lies David St. Hubbins, and why not?" If not involved in rock 'n roll, would "be a full-time dreamer." Among David's new projects is an Icelandic album of Broadway tunes called "Bjork, Bjork." (AOL) Personal mottoes: "A shallow genius is better than a deep fool" and "If you want to swing, you've got to hang." (MH1) He also confides to DiBergi in an interview scene cut from the film: "My thoughts [on-stage] are of copulating with each female in the audience-of age." David and Jeanine divorced in early 2000 on friendly terms. In recent years, David has been "communing with nature on a semi-regular basis" and become fascinated with Native American rituals, such as the Shumas sweat lodge. "I emerge from the smoke, the sweat and the stink of the sweat lodge with a purity that was just a dream on the way in." He added, "I think the simpler my philosophies have become, the easier they are to remember." As he grows older, David has inclined to move away from rock. "I've said this before, but rock 'n roll keeps you young, but you can only get away with that for so long. Eventually you become too old to stay young. And I think that's the point I reached." (VH1) See also Baker, LaVern; Biopic; ESPN "Sports-Center"; Lamé; Marriage; Namesake series; Pettibone, Jeanine; Pomona, California; Royal Albert Hall; Saucy Jack; Skiffle; Slime molds