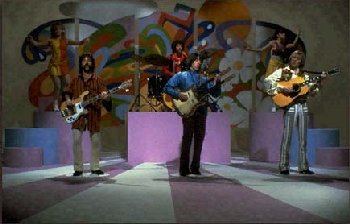 Spinal Tap Sings "(Listen to the) Flower People" and Other Favorites (Megaphone, 1967): The band’s gold debut. Rated A+ by Entertainment Weekly. "Clear, crisp, scintillating. Was it the first breath of a new dawn sweeping over the sludgy, self-satisfied rooftops of rock ’n roll? Or was it a new, gritty realism seeking to blot out the prettified homogeneity of early-’60s pop? Who cares?" Released in England as "Spinal Tap." Besides title cut, includes "Have a Nice Death," with drum solo by John "Stumpy" Pepys. Supported by tour of "the world and elsewhere."